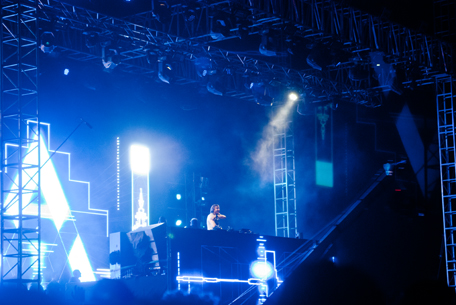 As David Guetta came on the stage at the Amanora Park Town on 10 March 2012 around 8 pm, there was a monstrous uproar and the 7000 plus crowd was thrown into a tizzy. The French music sensation started off by asking "Whats up, Pune, are you guys ready for the party? This is my first trip to India", which again sent the electronic dance music enthusiasts into a mad frenzy. Starting off the gig with 'Nothing but the Beat' and then going ton to sensational here's just no gettin over you', The DJ set the stage on the fire and led the audience to dance to their heart's content. The climax was as perfect for the fans as it could be with Senegalese American R&amp;B recording artist and singer Akon joining Guetta at the Amanora Park Town stage. There was a huge cheer all around as Guetta and Akon performed the single 'Crank It Up' for the first time, but not before the talented DJ had played a track which was initially named Mumbai, but later went on to be named Pune. It was a great show at the sprawling venue at Amanora Park Town, which left the audience completely enthralled and humming their way back home.
Enquire Now